Nonfarm payrolls were reported to have risen by “just” 98,000 in March, while the unemployment rate fell to its lowest level (4.5%) since May 2007. The March 14-15 FOMC minutes “revealed” that officials plan to begin reducing the size of the Fed’s balance sheet later this year. Why this should be news to anybody is a mystery – it’s been well telegraphed for some time.

Meanwhile, two regional Fed nowcasting models paint drastically different pictures of the 1Q17 economy. Let’s see if we can straighten this out… 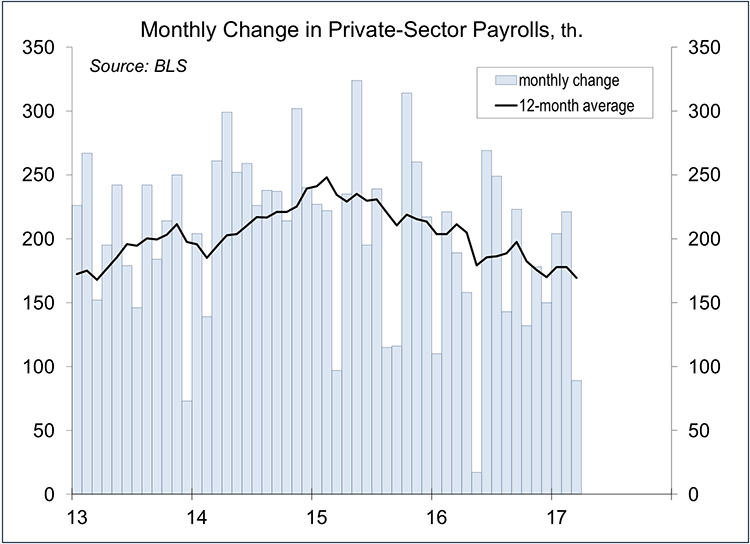 Bad weather was not a significant factor in March payrolls. The BLS reported that 164,000 individuals were not able to show up to work (during the survey week) due to bad weather (vs. an average of 151,000 over the last 10 years for March). However, mild weather may have pulled forward seasonal job gains that would normally have occurred in March. The late Easter could also be a factor (figures are adjusted for floating holidays, but it’s hard to get it right). One should not put much weight on any one particular month, but the three-month average of private-sector job gains (+171,000) matched the average for all of last year (+170,000). The trend in payroll growth since 2015 is lower, but that reflects the fact that the job market is getting tighter. The monthly change in payrolls is reported accurate to ±120,000 (90% confidence interval), which means that we can be 90% certain that the true monthly change for March was between -22,000 and +218,000. On a side note, a 98,000 monthly gain in payrolls is roughly consistent with the pace of growth in the working-age population (that is, enough to keep the unemployment rate from rising).

If payroll growth was reported to have slowed in March, how can the unemployment rate be lower? These figures come from two different BLS surveys. The household survey uses a sample of just 60,000 households – not a lot (given the size of the overall population), but enough to get relatively accurate estimates of ratios, such as labor force participation and the unemployment rate. The unemployment rate is reported accurate to ±0.2%, which means the drop in March was not statistically significant. However, there are plenty of other signs that the job market is getting tighter.

Normally, a tight job market would lead to faster wage growth. Average hourly earnings rose 0.2% in March, up 2.7% from a year earlier. That’s not especially strong, but it’s higher than we were seeing a couple of years ago.

The Fed expanded its balance sheet during the financial crisis and well into the economic recovery. Some critics feared that this would lead to hyperinflation and a plunge in the dollar – nonsense! Currently, the Fed buys new securities to replace maturing Treasury securities and mortgage-backed securities (and agency debt). The Fed planned to unwind its asset purchases before it even started to buy. Ending the reinvestment policy will allow the size of the balance sheet to decay over time. During Ben Bernanke’s tenure as chair, the end of the reinvestment policy was expected to be the first step in policy normalization. Under Yellen’s leadership, the end of the reinvestment policy was deferred until after the federal funds target rate had been raised a few times. None of this is news. The Fed has well-telegraphed that this is coming – no big deal. Note that, in order to maintain a steady, appropriate mix of maturities in its portfolio, the Fed expects to both buy and sell securities as the balance sheet shrinks.

Nowcasting models are used to estimate GDP growth. One simply adds the contributions of the various GDP components. The models differ in how they forecast the components. Some are fancier than others. As one adds more variables to the equation, you get a better fit to historical data – however, you’re also likely to get poorer forecasts. Parsimony is key.

The Atlanta Fed’s GDP Now model estimates 1Q17 GDP growth at +0.6%. In contrast, the New York Fed’s model has it at +2.8%. A week ago, the monthly personal income and spending numbers through February suggested that inflation-adjusted consumer spending (69% of GDP) was tracking at below a 1% annual rate in 1Q17. Unit auto sales were reported to have fallen in March and retail payrolls fell by nearly 30,000, which is consistent with weak retail sales results. My 1Q17 GDP estimate (now at 1.0%) is closer to the Atlanta Fed’s figure.

One soft quarter is not the end of the world. Consumer spending growth (and GDP growth) should pick up in 2Q17. However, the trend in payrolls is consistent with the view that economic growth will be restrained by the job market. The Fed focus is not on GDP growth, but on the job market.

The opinions offered by Dr. Brown should be considered a part of your overall decision-making process. For more information about this report – to discuss how this outlook may affect your personal situation and/or to learn how this insight may be incorporated into your investment strategy – please contact your financial advisor.

All expressions of opinion reflect the judgment of the Research Department of Raymond James & Associates (RJA) at this date and are subject to change. Information has been obtained from sources considered reliable, but we do not guarantee that the foregoing report is accurate or complete. Other departments of RJA may have information which is not available to the Research Department about companies mentioned in this report. RJA or its affiliates may execute transactions in the securities mentioned in this report which may not be consistent with the report’s conclusions. RJA may perform investment banking or other services for, or solicit investment banking business from, any company mentioned in this report. For institutional clients of the European Economic Area (EEA): This document (and any attachments or exhibits hereto) is intended only for EEA Institutional Clients or others to whom it may lawfully be submitted. There is no assurance that any of the trends mentioned will continue in the future. Past performance is not indicative of future results.