It’s a long-standing adage in Washington that the federal debt is a problem only when the other party is in charge. Republicans label Democrats as the party of “tax and spend,” while Republicans are deemed the party of “borrow and spend.” In truth, the federal budget is about what kind of society we want and who pays for that. Periodically, over the years, the budget has sometimes been seen to be in a crisis. The real concern has always been the long run, which is getting a lot closer. 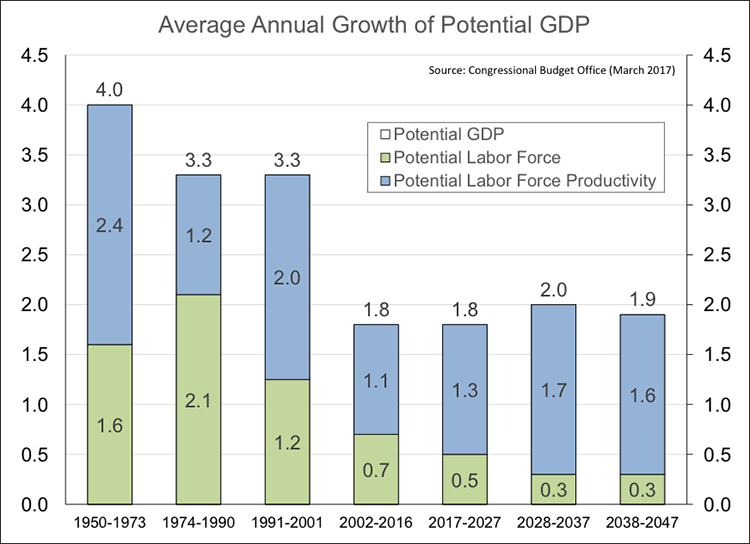 By now, the demographic story should be well-entrenched. Labor force growth has slowed in recent decades – and will continue to slow in the years ahead. In the last half of the 20thcentury, the baby-boom generation entered the workforce and female labor force participation rose. Those trends are far behind us now. Growth is simply labor force growth plus productivity growth. Job growth estimates simply reflect the demographics. Productivity growth, which is more uncertain, is seen largely as a function of previous business investment. A softer pace of capital spending following the Great Recession meant slower growth in output per worker over the last decade. Capital spending appears to be picking up now, and advances in artificial intelligence and robotics should lift productivity growth in the years ahead. That will help to offset some of the slowdown in labor force growth. However, it’s unlikely that the trend in real GDP growth will be much above 2%. Moreover, if productivity growth doesn’t pick up, potential GDP growth would be more likely to center around 1.5%.

The federal budget deficit ballooned to $1.4 trillion (10% of GDP) during the financial crisis, but that was temporary. The surge merely reflected the magnitude of the economic downturn. Revenues dried up. Recession-related spending (food stamps, unemployment insurance, etc.) rose sharply. The budget deficit was 2.4% of GDP in FY15, but is now rising again. 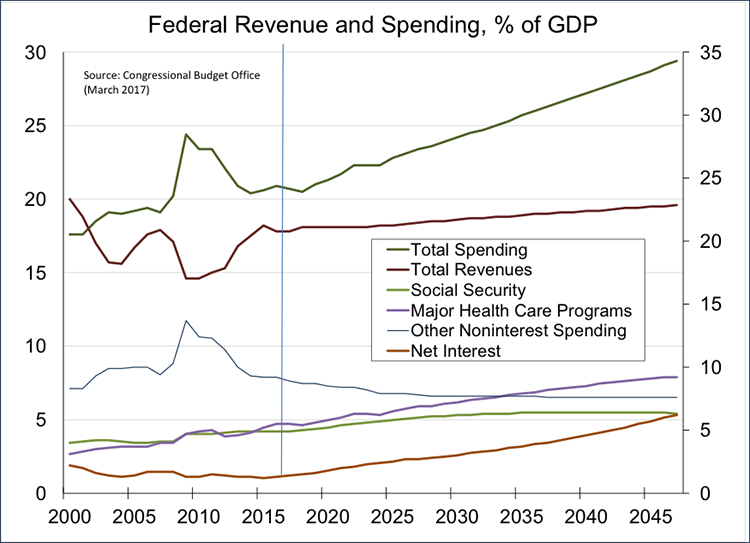 The long-term budget outlook is troublesome, and we’ve known that for a number of decades. During the 1980s, President Reagan’s National Commission on Social Security, led by Alan Greenspan (before he became Fed chair), made a number of recommendations. One was to build up a trust fund. Workers would pay more into Social Security (and also Medicare) than was coming out. The trust funds would build up. Then, as the baby-boom generation retired, those funds would be tapped, extending the life of these programs. The government has effectively borrowed against these funds. They still exist, as an account, earning interest, but the government cannot reduce them without increasing taxes or borrowing more from the private sector. Can’t the government spend less? There’s nothing to be done about interest payments. If you don’t touch Social Security or Medicare, and want to keep defense spending steady or higher (as a percentage of GDP), there isn’t a whole lot left to cut. Something will have to give.

Tough choices lie ahead, but for Congress, the first rule should be to do no harm. Cutting taxes isn’t going to help the situation and raising them won’t close the budget gap over time. Voters will dislike cuts to Social Security and Medicare spending.

One partial solution would be to boost immigration. Immigrants, legal or otherwise, on average pay more in taxes than they receive in benefits. Instead, the near-term policy push is in the other direction. While labor force growth is slowing down, about 40% of the labor force increase over the next ten years is expected to be immigrants. Current policies may reduce that – further reducing trend GDP growth and adding more strain to the long-term budget outlook.

There is plenty of room for the two parties to reach agreement. The long-term budget situation does not need to be solved overnight. However, it would be helpful if the two sides simply recognized the problem and dropped the rhetoric.

The opinions offered by Dr. Brown should be considered a part of your overall decision-making process. For more information about this report – to discuss how this outlook may affect your personal situation and/or to learn how this insight may be incorporated into your investment strategy – please contact your financial advisor.

All expressions of opinion reflect the judgment of the Research Department of Raymond James & Associates (RJA) at this date and are subject to change. Information has been obtained from sources considered reliable, but we do not guarantee that the foregoing report is accurate or complete. Other departments of RJA may have information which is not available to the Research Department about companies mentioned in this report. RJA or its affiliates may execute transactions in the securities mentioned in this report which may not be consistent with the report’s conclusions. RJA may perform investment banking or other services for, or solicit investment banking business from, any company mentioned in this report. For institutional clients of the European Economic Area (EEA): This document (and any attachments or exhibits hereto) is intended only for EEA Institutional Clients or others to whom it may lawfully be submitted. There is no assurance that any of the trends mentioned will continue in the future. Past performance is not indicative of future results.